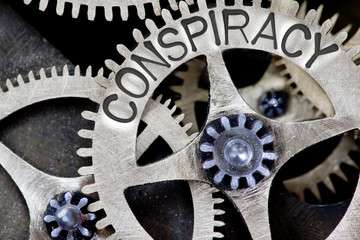 It seems to me that the general knowledge of conspiracy theories (e.g. to be able to mention at least 3 of them) lately has drastically widened. Whether it’s triggered by the sudden abundance of time to spend on free browsing as millions remained home due to lockdown; or by the evident incapacity of ruling authorities to provide consistent flow of relevant information on COVID-19&Co, I dare not say. It may as well be simply a 2020-fashion (in our forties we are already familiar with the fact that things in life are capable of quickly coming and going). Whatever the reason, the public attention on conspiracy theories has brought to the limelight awkward revelations of the secret knowledge and ultimate truth lifting the curtain of parallel reality dominated by macabre plots against humanity.

It is well known that conspiracies are always about monstrous scenarios leading to extinction of the normal people in favour of mysterious elites (labeled as illuminati, reptiloids, sorosoids – you name it). None of them depicts, let’s say, the worriless paradise of eternal happiness where secret angels are devoted to relieve humanity’s all sorrows. This common trait is explained by the very nature of conspiring – it’s a cognitive process, established with human evolution to protect our species from invisible and hidden, but expectable dangers.

Specialists are keen to blame conspiracies on the brain’s necessity to see patterns, even where they do not exist (like constellations or dog-like cloud) [1]. What’s more, belonging to a group which shares a conspiracy seems to sufficiently validate the story and any counter-facts are easily discarded without further consideration. Another cognitive phenomena, the so-called biases or the mental shortcuts by which information is processed, might also be in favour of thriving conspiracies. The belief that major events must have major causes, known as “proportionality bias” is among the culprits as this fuels the desire to find out the big plan behind the curtains. It goes hand in hand with the so-called “intentionality bias” (events are definitely planned by someone!) and the notorious confirmation bias, which always makes things worse, by making us ignore evidence that is inconsistent with what we already know or believe. [2]

If we go deeper and try to understand what is the profile of the so-called conspirolog, it may not be a surprise that usually these are people who feel disadvantaged, ignored or less appreciated, which in turn find defence in finding someone to blame. [3] In the worse cases, this may even lead to a condition, known as a Conspiracy Theory Addiction. Low self-esteem, strong urge to make connections between unrelated events or behaviors and belief in paranormal explanations are just a few of the recognisable symptoms. [4] Some research also puts it in more simple terms, claiming that the affection for conspiracy theories is due to lower levels of education and critical thinking. [5] Drawing on the findings in the relatively new research domain, we now know for certain that there is nothing new in the very nature of conspiracies as they thrive in all cultures and societies throughout humanity’s timespan. Nonetheless, being always closely related to emotions they never cease to excite and surprise in terms of “new evidence” and “unbelievable explanations” (which is actually a bit trivial to non-believers).

A very extravagant example of a conspiracy is the one about Denver International Airport (DIA). Shortly after it was constructed back in 1995 a series of “unusual” facts and events triggered the interest of conspiracy-bound minds. As a matter of fact, it is rather difficult to find publications of the original conspiracy content compared to such that aim at debunking it. Nevertheless, all versions are quite consistent to depict the macabre site, disguised as an unnecessary airport, meant to host secret elites when the New Age plan for the world begins. Of course, the usual suspects are illuminati, whose omnipotence is coded in… the airport’s artwork, rich in symbolic meaning. The notorious murals, somewhat naively named “In Peace and Harmony with Nature” and “Children of the World Dream of Peace”, indeed seem to be counterproductive: where the author meant to show the triumph of Good in the vision of children, sleeping conspirologists see infants, diseased during upcoming mass destruction. [6] 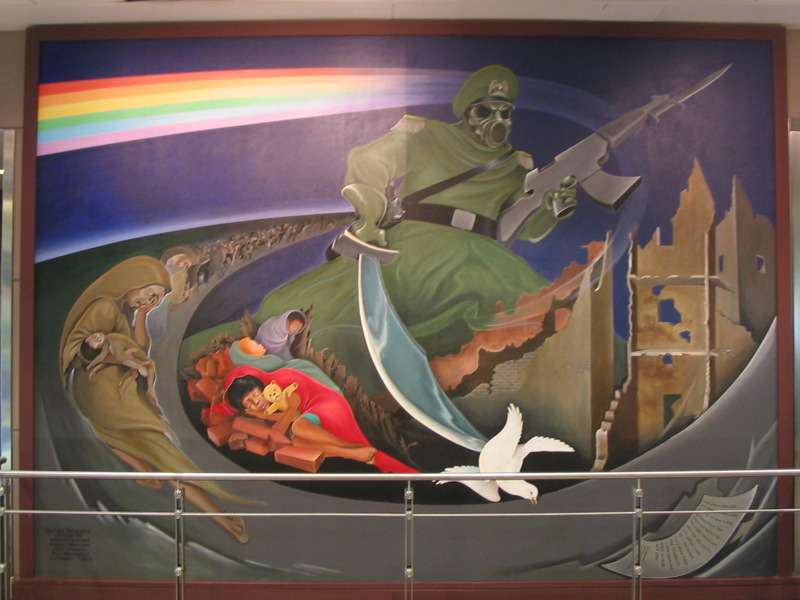 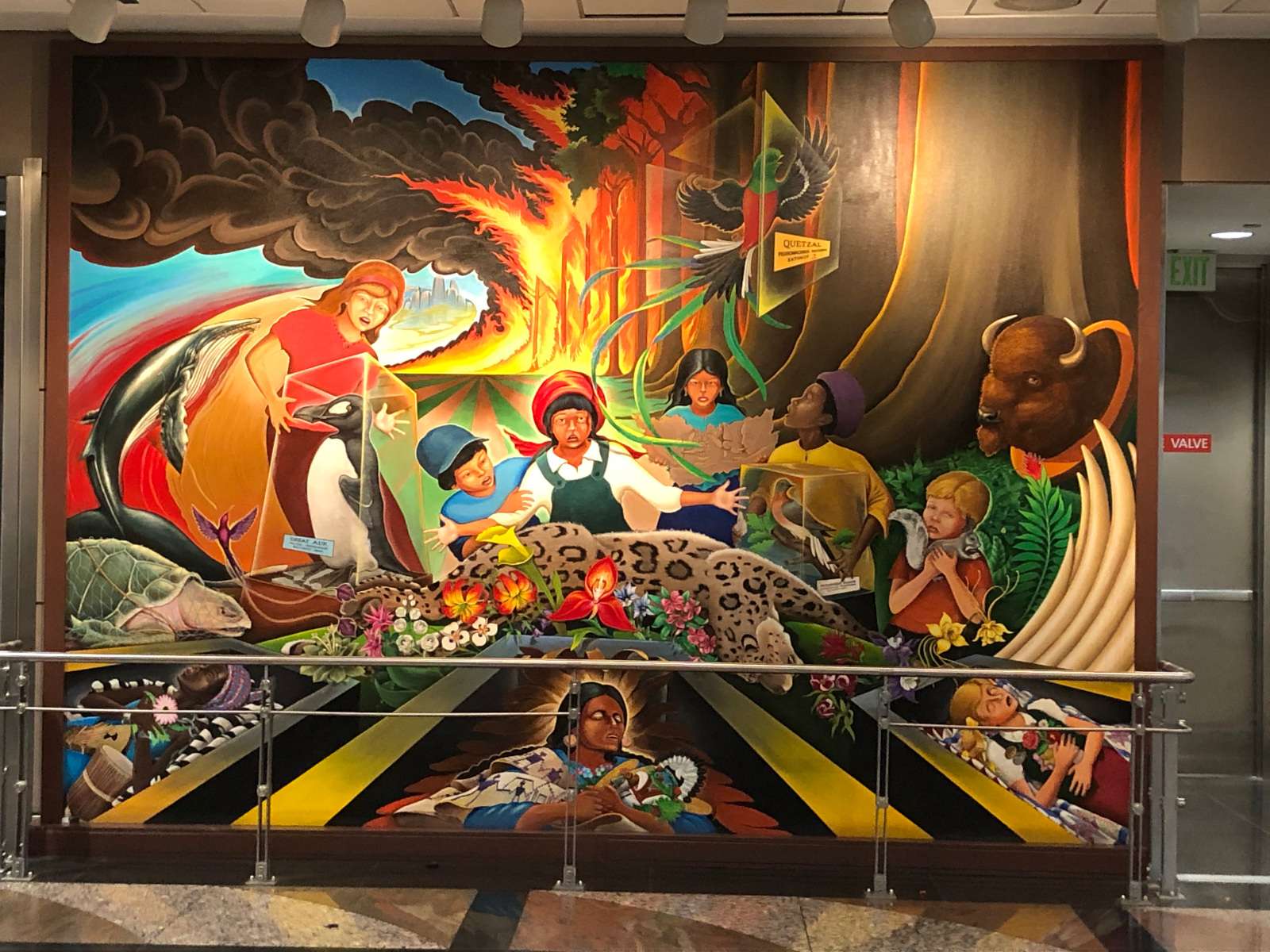 DIA conspiracy deploys the “classical” approach of intertwining unlinked information to spin its web – here is one of the flabbergasting examples: “Africans have traditionally practiced a very ancient type of Witchcraft which is exceedingly powerful; however, it is different from the Western Witchcraft which the Illuminized Masonic Fraternity practices. Therefore, the Illuminati plans to eradicate the African type of Witchcraft”. [7] In this particular case we have a vivid confirmation that these are not the facts that matter, but the narrative. The more emotional and symbolic, the more involved and blinded is the reader. The facts on DIA are easy to access, and nevertheless neglected. A nice experiment is published by the Sceptical Inquirer back in 2012 [8], where the author Robert Blaskiewicz tries to provoke passengers at the DIA to express their opinions on surrounding artwork. It’s striking that people usually pay no attention or, when asked, readily repeat the concentration-camp-and-dead-children mantra. Challenging the conspiracy scenario leaves the respondent uneasy. Meanwhile, interviews with Leo Tanguma, the artist who created the murals, are easily available on the internet [9] and everyone interested in the originally intended message of the art can read it for themselves. Or can even examine the official records related to all the art pieces in DIA (…unless the access is denied for security reasons, as currently reads the announcement on the webpage. [10] Yet again, the moral of the story is that somehow we humans are perfectly inclined to conspiring — it makes us feel that we know “better”, it flirts with our emotions and teases our imagination, it strengthens our blind trust in what in-group others say. What about facts? They are all over the place — misused, abused or simply unused. A soothing remedy, as suggested by research [11], might be developing the so-called scientific literacy. In other words, instead of wasting time to repeat facts and try to convince non-believers, it’d be more practical to educate people why facts are important as well as build their ability to navigate in the rough sea of information where these facts unfortunately also drift.

To tell the truth, when I considered which conspiracies to discuss in order to add to the common effort to unmask their harmful potential, I deliberately avoided the ubiquitous “5G&Corona” or “chemtrails”. I myself feel quite exposed and as a result desensitised on these motifs, how about you? Therefore I was so curious to read something as novel and unbelievable as that… Finland does not exist. Unlike the DIA, this a sort of lighthearted conspiracy, which started as a mere joke: there is no real country of Finland, but a strip of ocean shared by Japan and Russia and exploited as a fishing reign. [12] (I apologize to the Finns for breaking the rule not to repeat the myth as it is what people will remember at the end of the day!) Of course, supported by “facts” as solid as a true map, depicting the lack of a land like Finland. 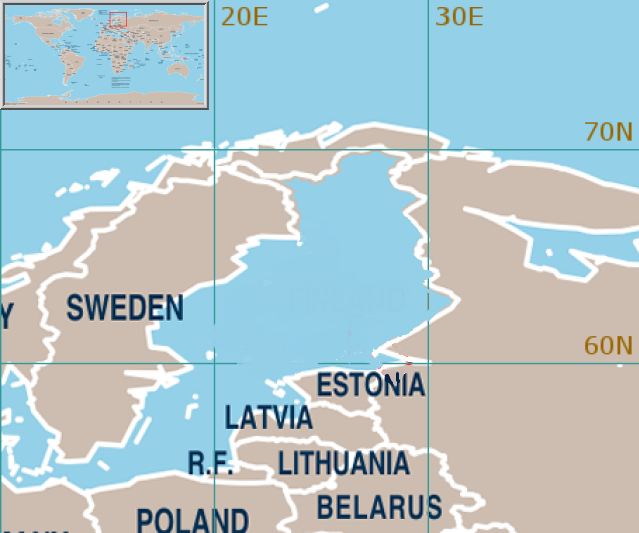 Drawing on the above mentioned examples, it may not be exaggerated to conclude that the brain is capable of inventing conspiracy out of anything. Couldn’t we take it as a sort of twisted (or perhaps intricate) mode of artistic expression? This will definitely make life easier, once we make sure that everyone takes it the same way. That’s a challenge!

*
The effort to denounce common features of conspiracies (such as keywords or lang), apart from being time- and imagination-consuming, is rather futile, even meaningless. They are very much alike indeed, as they stem from the same exacerbated necessity of the human brain to keep things in order and under control. “Everything happens for a reason” is wishful thinking, or at least it sounds consoling. Failure to accept that randomness often rules triggers the brain’s power to create – stories, images, personality, patterns where such simply do not exist. And therefore they are so, so much different that there it makes almost no sense to compare one to another.

Yet, there is one thing all conspiracies share in common – they are impossible to combat. Each argument is countered fiercely; each fact against is a step for deploying new unthinkable explanation, which in turn reassures the authoring brain in its extra capabilities to be the one who sees the truth (unlike the sheepish folks, the rest of us). This reminds me of the striking evidence used by conspirologists to convince the ignorants that Finland does not exist, but is instead a strip of land serving fishing purposes – it was named after fish fins. The very assumption that someone may take this for granted leaves me speechless… And remaining speechless is exactly what fuels back the conspiracy. (By the way, the simple google search shows that Finland in Finnish is Suomi, which comes from “suo maa” which means “swamp land”, and “fish fins” is translated as “kalan evät”. The guess that a country’s name is to be first looked up in the same country’s language is due to my linguist’s biases.)

While preparing this article, we asked SOMA members which were the most popular conspiracies at their end. We got responses from Sweden, Finland, Armenia and Germany who were generous to share with us which are the most popular conspiracies in their part of the world. The results are more exciting than expected as the wild local variety seems to be worth an investigation of its own – 5G vs Corona (Annelie Frank), election fraud in US and Qanon (Petra Piitulainen-Ramsay), the “Dulles plan” (Armen Grigoryan), “Who killed Detlev Karsten Rohwedder?” (Julian Haug), to mention but a few.

Milena Zvancharova is a Senior Researcher and Project Manager at NTCenter. Her background is in cultural anthropology and linguistics, with interests in the field of intercultural communication and applied cognitive science. This article was simultaneously published by the European Observatory Against Disinformation.